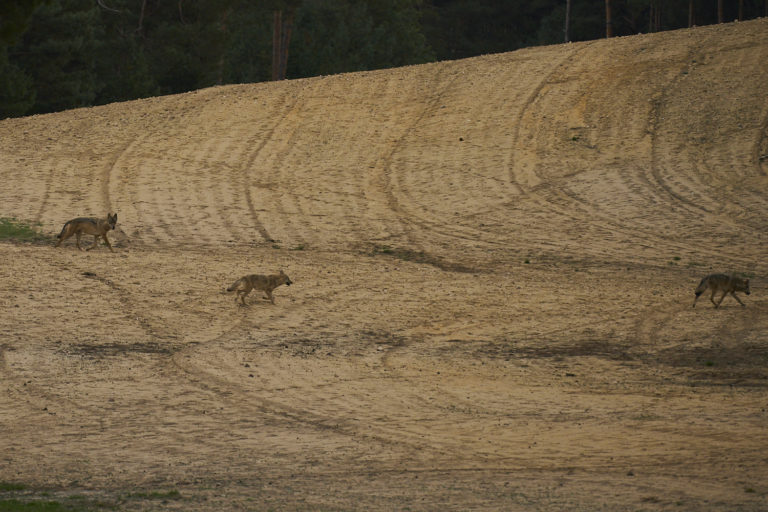 October 2021
The recent history of the Grey Wolf Canis lupus in Central Europe, like almost everywhere
else in the world, is also a history of competition, suppression and finally persecution.
In superstition, they were portrayed as dangerous to humans directly, they were in fact seen
as competitors for food and were therefore killed throughout the area.
In addition to the desire to kill, hunters also see themselves in the role of those who have
to put nature in order and, with the end of the Grey Wolf in Central Europe also as the end
of the food chain. One argument in favour of hunting wild animals has been, at the latest
since the Grey Wolf’s extinction, to have to take over its role in nature.

In 1904, the last wild local Grey Wolf was shot in Germany. Between 1945 and 1990
13 wolves were killed in the GDR (‘East-Germany’) and nine in the FRG (‘West-Germany’).
Since 1990, the Grey Wolf has been protected by the Nature Conservation Act in Germany,
but exploring Grey Wolves are continuously shot illegally.
Increasing exploration movements of Eastern European populations led in 2000, for the first
time since 1850, to the reproduction of a wild pair of Grey Wolves. Then the development
accelerated.

Between 2000 and the end of 2020, the following figures were given for kills:
roadkill 393, illegal intentional kills 51

Since the ‘return’ of the Grey Wolf to Germany, an unpleasant mixture of hunting-, agricultural-
and shepherd lobbies, together with the conservative to right-wing press, has been exerting
pressure on politicians to officially allow Grey Wolves to be shot and to place the management
of the population under the control of the hunting authority.
Since 2020, so-called ‘problem wolves‘ can now officially be killed in Germany. These are
individuals that either repeatedly attack unprotected livestock herds or do not shy away from
humans and visit human settlements in search of food.
In the hope of a little bit of local or social media fame, people have in the past fed Grey Wolf
offspring and posted videos of them. Animals that are imprinted on humans often lose all
shyness and are thus more or less tame.

Despite all the antipathy towards livestock breeders, it must be said that in parts of this
community a slow rethinking is taking place and people are getting used to now necessary
protection measures, e.g. for sheep, and thus no longer support the call for a management
of the Grey Wolf population.

This audio recording comes from a wild pack of Grey Wolves in Brandenburg.

Thanks are due to all those who are committed to opposing the killing of wildlife and of
course to Сталкер TN!